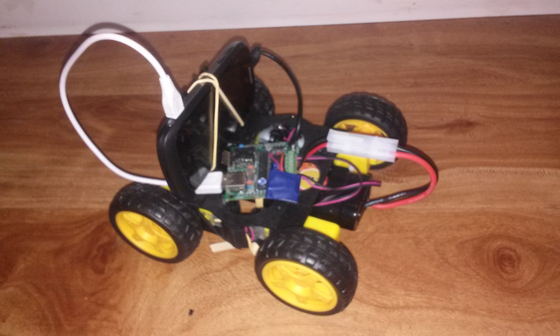 Robots Anywhere is an advanced control system that runs on Android, and uses a hardware interface to allow a phone to control almost any type of robot or autonomous vehicle. Drones on land, sea, and air are all possible using Robots Anywhere, with off-the-shelf commercial hardware.

The Robots Anywhere app can output signals via bluetooth, wifi, serial, and audio to a “spinal cord” circuit like our own Antbot Board.

The Robots Anywhere application can also support GPS navigation, which will be further refined in the upcoming 2.0.

Robots Anywhere’s flagship robot is our Antbot, built on the legacy of the educational antbot. The same quad motor, steel chassis design is still available, or you can now 3D print an inexpensive version!

Robots Anywhere is designed specifically for low bandwidth environments, meaning you can operate on 2G, satellite, or even dial-up networks and still drive. We’ve used this to get pizzas in rural Italy with an operator in Canada, and ship our L-Cheapo lasers among other things. If you need a low-cost, low-bandwidth fleet solution, contact us!

Please refer to our wiki for an install guide for Robots Anywhere 1.0.

To download the APK and the PC console, see below. The Android console (Requires Android 4.x or higher) is available on the Play Store.

Robots Anywhere 2.0 has been renamed to Antbot, after its most successful, flagship product. We are now nearing the end of internal testing, and are preparing to launch a new line of robot chassis to accompany the new, more modern system.

All existing Robots Anywhere systems and robots will be backwards compatible with Antbot 2.0.